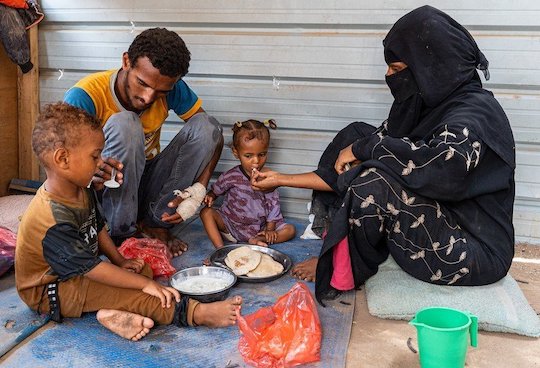 The head of the U.N. food agency has warned that 13 million Yemenis are headed for starvation due to a protracted civil conflict and a lack of funding for humanitarian aid.

In an interview with The Associated Press on Wednesday, David Beasley said that Yemen was “in a very bad situation” with more than 40 percent of the population already relying on food supplies from the World Food Program.

"We’re feeding 13 million people out of a nation of 30 million people, and we are running out of money,” Beasley said, speaking from the capital, Sanaa.

“We've got twice the number of people struggling around the world now,” Beasley said. “So, what am I gonna do for the children in Yemen? Steal it from the children in Ethiopia, or Afghanistan, or Nigeria or in Syria? That’s not right,” he added.

Beasley said his agency was forced to cut rations in half for eight million Yemenis due to the shortage of funds.

“We may be cutting those down to zero. What do you think will happen? people will die. It will be catastrophic,” he said.

According to the UN food agency, around 811 million people do not have enough food across the globe, and and estimated 45 million people in 43 countries are at risk of famine.

Beasley said the WFP needs an extra 9 billion dollars to meet the rising demand for food aid around the world.

“The $430 trillion worth of wealth in the world today, there should not be a single child dying anywhere on earth,” he contended.

Yemen has been fighting a civil war since 2014, when Iran-backed Houthi rebels took control of the capital of Sanaa and much of the northern part of the country, forcing the government of President Abed Rabbo Mansour Hadi to flee to the south, then to Saudi Arabia.

A Saudi-led coalition entered the war in March 2015, backed by the United States, to try to restore Hadi and his internationally recognized government to power. Despite a relentless air campaign and ground fighting, the war has deteriorated largely into a stalemate and caused a humanitarian crisis. The U.S. has since suspended its direct involvement in the conflict.

Filed under:
Poverty and hunger, War and conflict

News: Yemen: Famine around the corner, says World Food Programme
People in Yemen face famine unless the world takes immediate action, the World Food Programme has warned at a high-level fundraising conference.
News: Yemeni children are trapped in 'worst humanitarian disaster in modern history'
Nearly four out of five children in Yemen are now in need of immediate humanitarian assistance, leading humanitarian groups announced in a joint statement...
Article: Why Congress must vote on the United States’ role in Yemen
Few Americans know that the U.S. military is making the crisis in Yemen worse by helping one side in the conflict bomb innocent civilians. We believe that...
News: Famine may be unfolding 'right now' in Yemen, warns UN relief wing
The United Nations relief wing on Friday warned of famine-like conditions unfolding in Yemen, as a blockade on aid and other essential goods by a Saudi-...
News: Famine in Yemen could become one of worst in living memory, UN says
Yemen is sliding fast toward what could become one of the worst famines in living memory, the UN’s top emergency relief official has warned.
Printer-friendly version