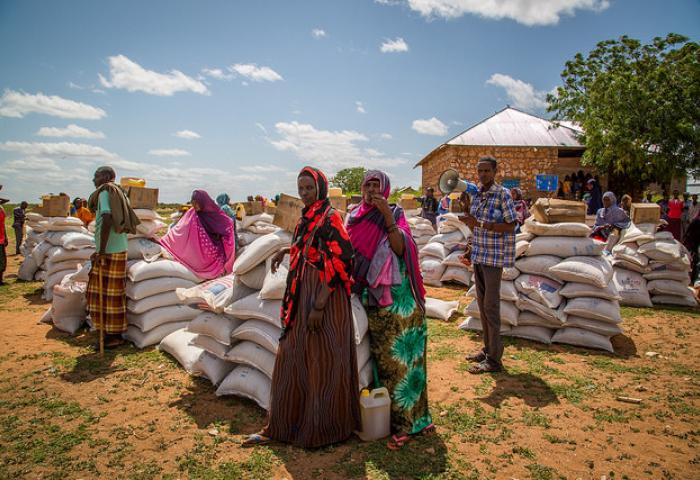 These latest figures reveal a deterioration of food insecurity conditions documented in the 2017 Global Report on Food Crises, which identified 108 million people living in food security crises in 48 countries. And they mark a 55 percent increase from the 80 million at risk people identified by the same analysis in 2016.

“It is pretty alarming. It’s been a steep upward slope,” said Arif Husain, the World Food Programme’s chief economist and head of food security analysis service. “If you look between 2017 and 2018, you can see none of the big wars, or conflicts, have been resolved. So, it makes sense the numbers are increasing.”

Persistent drought in eastern and southern Africa and other climatic events, such as hurricanes in the Caribbean, have also perpetuated food insecurity, according to the Food Security Information Network. FSIN is a global coalition co-sponsored by the Food and Agriculture Organization, the World Food Programme and the International Food Policy Research Institute. Their latest findings were released Thursday.

The report comes as northeast Nigeria, Sudan, Somalia, the Democratic Republic of the Congo, and the Central African Republic prepare to enter the “lean season,” when food from the previous crop season is nearly exhausted, and new crops have not yet matured.

The biggest food insecurity situation last year was in Yemen, a country largely dependent on food imports. About a third of the food crises in 2017 were centered in northeast Nigeria, Somalia, Yemen, and South Sudan.

Famine — a technical classification dependent on a certain rate of deaths, and percentage of a population facing food shortages and malnutrition — posed a persistent threat to about 20 million people collectively in Yemen, Somalia, northeast Nigeria, and South Sudan last year. And it was declared in two counties in South Sudan.

These major risks of famine were averted, in part because of the FSIN Global Report issued last year, according to Neven Mimica, commissioner for international cooperation and development at the European Commission.

“In 2017, the Global Report on Food Crises alerted us about the risk of famines in a number of partner countries. Thanks to local and international efforts, including in the most critical hotspots, we were able to avert major famines,” Mimica said in a statement. “But let us be clear: We still have huge challenges ahead of us, and the EU will continue to work relentlessly for food security around the world.” Total contributions to WFP totaled $6.8 billion in 2017, short of the the $9 billion they sought to raise. This year, their target is $9 billion.

The report, often used as a policy document by governments, offers a grim prognosis for global food insecurity in 2018.

Yemen is again expected to be the largest food crisis this year. About 17 million people — more than half the country’s population — are now food-insecure. Restricted access for aid organizations, economic volatility, and outbreak of disease are all expected to further worsen the situation. Last month, the World Health Organization warned that the upcoming rainy season in Yemen could lead to an increase of cholera cases. This follows an outbreak last year, which infected more than 1 million people by the end of December.

Drought, conflict, and economic downturns are also expected to push South Sudan, Ethiopia, Nigeria, and Somalia into a “category four” emergency situation, as per the FSIN’s five-phase categories.

Husain stressed the importance of an aid response that is inclusive of development work, and the need for political solutions to end conflicts. Last year, U.N. leaders launched a $4.4 billion appeal to ward off famine risks, accompanied by a new way of working that better links emergency response and development work. This means embarking on nutrition interventions, working with smallholder farmers and connecting them to markets, and conducting water harvesting and reforestation work, according to Husain.

“We have to focus on saving lives and doing all of this work in other places where there is stability. We need to work in the rural sector to make sure people have reasonable livelihoods for themselves,” he said.

Part of this need stems from the indirect effects conflict has on people who are not directly affected. Those links can play out in high currency rates and depreciation of currencies, for example, making broader populations more vulnerable. But ending the multiple protracted crises is also at the heart of the issue.

“Unless these conflicts go away, it is always touch and go. So we need to keep our foot on the gas pedal,” Husain said.

Filed under:
Poverty and hunger, Inequality, Environment, War and conflict

News: Fighting famine: 'Unprecedented crisis' putting 20 million people at risk, warns UN agency
Twenty million people risk dying of hunger in South Sudan, Somalia, Yemen and the north-east of Nigeria, including 1.4 million children suffering from...
News: Famine may be unfolding 'right now' in Yemen, warns UN relief wing
The United Nations relief wing on Friday warned of famine-like conditions unfolding in Yemen, as a blockade on aid and other essential goods by a Saudi-...
News: South Sudan no longer has 'famine,' UN says, but 2 million remain near starvation
South Sudan no longer has areas in famine, but almost two million people are on the brink of starvation and an estimated six million people — half the...
Article: Famine looms in four countries as aid system struggles to cope, experts warn
Famine is looming in four different countries, threatening unprecedented levels of hunger and a global crisis that is already stretching the aid and...
Printer-friendly version