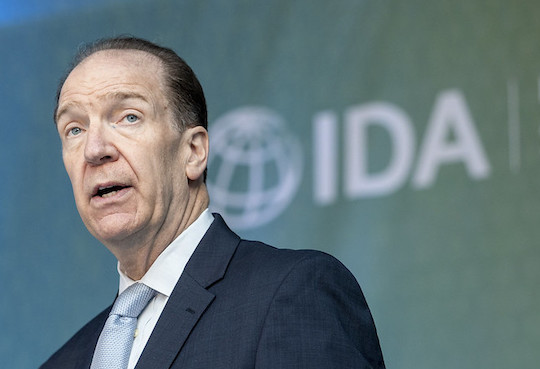 The Covid-19 pandemic has led to a “tragic reversal” in development and pushed debt in poor countries to record levels, the head of the World Bank has said.

David Malpass, the bank’s president, warned the virus had widened the gap between rich and poor nations, setting back progress by years and, in the case of some countries, by a decade.

Announcing new World Bank figures showing the debt burden of more than 70 low-income nations had increased by a record 12% to $860bn (£630bn) in 2020, Malpass called for a comprehensive plan to ease the debt pressures and for rich countries to make vaccines available to the less well-off.

He said one particular problem was the lack of a bankruptcy process to help in cases where debts had become unsustainable. Under the current system, companies can declare themselves bankrupt but countries cannot.

With income per head expected to rise by an average of 5% in developed countries this year compared with 0.5% in developing countries, Malpass said the problem of inequality was getting worse.

The bank fears the problems of poor countries could deteriorate further as global interest rates rise from the emergency levels seen during the crisis.

Malpass said: “We need a comprehensive approach to the debt problem, including debt reduction, swifter restructuring and improved transparency. Sustainable debt levels are vital for economic recovery and poverty reduction.”

Last year’s 12% increase followed a 9.5% jump in 2019 among the 73 countries eligible to have their debt payments suspended under an initiative orchestrated by the World Bank and the International Monetary Fund during the early stages of the pandemic to ease the financial pressure on the poorest countries.

Under the scheme, the G20 group of major developed and emerging market countries has agreed to defer debt repayments until the end of 2021. This, though, has had only a limited impact on suspending payments.

Stressing the need for further action, Malpass said that even before the crisis, rising debt levels were already a concern in many countries and vulnerabilities had increased dramatically in 2020.

“The crisis drove up financing needs and thereby public borrowing, while weakening individual countries’ economic fundamentals and capacity to service and repay public debt,” Malpass said. “The risk now is that too many countries will emerge from the Covid-19 crisis with a large debt overhang that could take years to manage.”

The report was launched ahead of the World Bank’s annual meeting in Washington this week and against a backdrop of some central banks – including the US Federal Reserve and the Bank of England – considering action to combat rising inflation.

Report: Demanding justice beyond rhetoric
The latest Spotlight on Sustainable Development 2021 report argues that it's time to overcome contradictions and hypocrisy in the COVID-19 crisis....
News: Wealthy nations must share more resources or risk crisis for billions, warns UN chief
The head of the UN has called on rich countries to step up efforts to protect workers hit by the Covid-19 pandemic with an additional $1tn injection of...
Report: More than 100 countries face spending cuts as Covid worsens debt crisis, report warns
More than 100 countries face cuts to public spending on health, education and social protection as the Covid-19 pandemic compounds already high levels of...
Blog: Ballooning debt forces poor countries to cut public spending
Poorer countries are cutting public spending in response to a “growing debt crisis”, campaigners have warned.
News: Debt crisis warning as poorest countries' repayment bills soar
Debt repayments by the world’s poorest countries have doubled since 2010 to reach their highest level since just before the internationally organised...
News: G20 suspends debt payments for poorest countries
International aid and development organisations stress that suspending debt payments during a major global economic and health emergency may not be enough...
Printer-friendly version