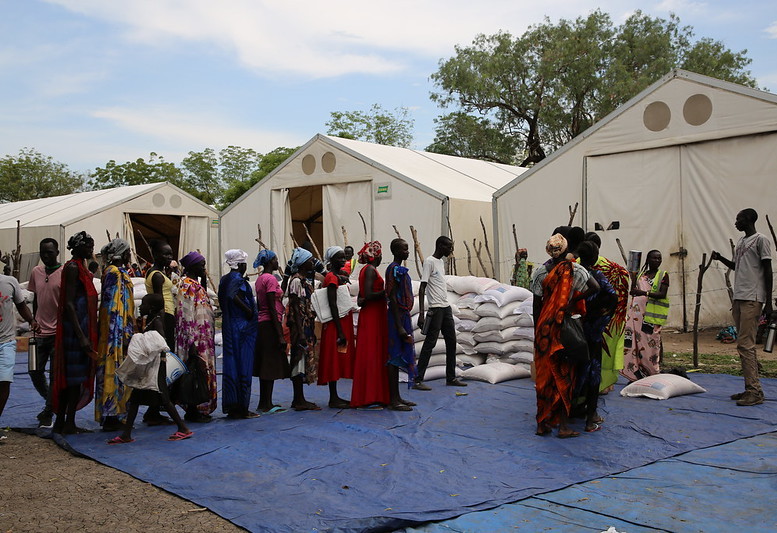 Conflict and climate change resulted in many more people needing humanitarian assistance in 2019 than predicted. According to OCHA’s “Global Humanitarian Overview 2020,” 168 million people worldwide will need assistance in the coming year — the “highest figure in decades.”

The humanitarian system will require $28.8 billion to respond next year — but needs are growing faster than funding, according to the evidence-based assessment of humanitarian trends, launched in four European cities and Washington on Wednesday.The United Nations urged donors to provide the funds.

“The current state of geopolitics means conflicts are becoming more protracted and intense,” said Mark Lowcock, U.N. undersecretary-general for humanitarian affairs and emergency relief coordinator, in the report’s introduction. “I fear 2020 will be a difficult year.”

Slower economic growth and debt problems further exacerbate humanitarian situations already being impacted by conflict and climate change, Lowcock said. More frequent drought and extreme weather events disproportionately affect already poor and vulnerable populations, with 11 out of the 20 countries most vulnerable to climate change appealing for humanitarian aid in each of the past seven years, he said.

“We need to do better in prioritizing climate change adaptation as part of humanitarian response,” Lowcock said.

In 2019, $16 billion provided 103 million people with lifesaving humanitarian assistance. According to the report, 75% of those funds are coordinated through the U.N., which makes the system more efficient and effective, Lowcock said.

“The 2020 GHO represents a global collective response across the United Nations, NGOs, and partners,” said Lisa Carty, director of the humanitarian financing and resource mobilization division at OCHA, referring to the new report.

“It is a road map and it is a call to action for meeting the needs and being accountable for those most affected by crises. It can help save millions of lives, and its success will be determined by the efforts and engagement of many.”

The largest single country crisis is Yemen, with 24 million people in need of humanitarian assistance — nearly 80% of the country’s total population. Syria remains the driver of the world’s largest refugee crisis, with 5.6 million refugees in the region and 6 million people displaced internally. Growing displacement in the Sahel and continuing crises in Somalia, South Sudan, and the Democratic Republic of the Congo will also drive humanitarian needs in 2020, the report said.

The U.S. Agency for International Development will be using the report in its planning for the coming year, according to Tim Ziemer, senior deputy assistant administrator at USAID’s Bureau for Democracy, Conflict, and Humanitarian Assistance. The agency’s humanitarian efforts are being streamlined through USAID transformation, which Ziemer said will help by consolidating bureaus that play a role in response efforts, such as the Office of Food for Peace and the Office of U.S. Foreign Disaster Assistance.

“We’re lumping all of that in so that, within the agency, we’re breaking down the silos and the divisions so that we can collectively start answering the charge,” Ziemer said. “We have to look at the root cause of what is creating these crises, and it goes back to human nature: It’s poor governance, it’s inability to avoid conflict. In fact, it precipitates much of the humanitarian work ahead of us.”

Ziemer said USAID responded to 64 disasters, both natural and man-made, in 56 countries in 2019. USAID and the State Department have spent $6 billion on those responses, he said.

He said he hopes the report will help encourage humanitarian actors to work together more effectively to provide advance warning of an oncoming crisis and speed response times when one hits.

“We have to have a measured approach collectively to work together in a certain place. That sounds simple, but — no one in this room would disagree with me — we’re not doing a very good job,” Ziemer said. “Hopefully this report will allow us to continue to challenge each other.”

Filed under:
Environment, War and conflict

News: Global hunger increases for a third year due to conflict, UN report finds
Global hunger has increased for a third consecutive year, with more than 821 million people suffering from chronic starvation driven by conflict and...
News: 'Price of conflict is too high': hunger at crisis levels in eight countries
The number of hungry people living in conflict zones is rising, with eight countries recording crisis or emergency levels of food insecurity in at least a...
News: 'Climate apartheid' to push 120 million into poverty by 2030, UN says
The world is facing a "climate apartheid" between the rich who can protect themselves and the poor who are left behind, the UN has warned in a new report...
Blog: End the wars to halt the refugee crisis
"Despite the obvious correlation between Western-sustained wars and the EU’s refugee crisis, no moral awakening is yet to be realized." By Ramzy Baroud.
Printer-friendly version