The Gaza crisis, giving thanks, and more on austerity... 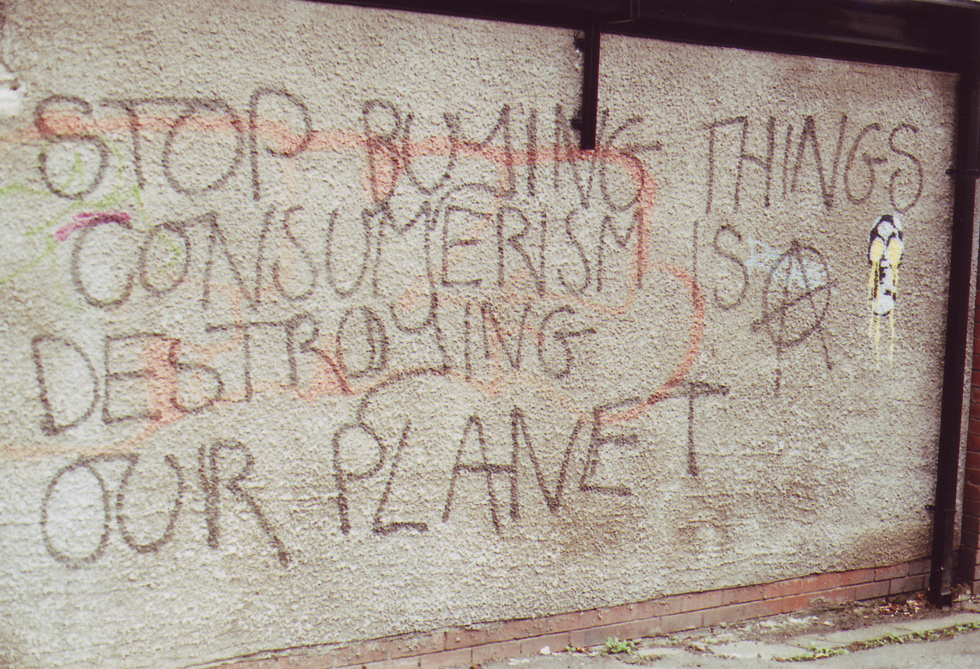 As the Middle East dominated headlines and op-eds this week, nationwide protests against Wal-Mart in the US revealed a spirit of sharing and solidarity amid the shopping mayhem of Black Friday, while over in Europe the news was dominated by austerity, austerity and more austerity. A roundup of recent news highlights.

The Israel-Palestine conflict has again taken centre stage in world affairs, with well over 1,500 air strikes devastating the impoverished Gaza Strip in the space of a week. More than 140 Palestinians were killed - mostly civilians, including at least 34 children - while five Israelis also died. As Robert Fisk questioned in the Independent, what was it all for? Whatever the motives ascribed to the Israeli government, and whatever the distortions of truth and reality from the mainstream media, the same questions still remain over Israel's war of dispossession against the Palestinian people, its illegal occupation and colonisation of Palestinian land, and the ever-distant prospects of Palestinian statehood.

As STWR wrote in a blog post: "The true reality in plain English was that the latest siege of Gaza... was a crime against the Palestinian people, a cruel attack on a defenceless civilian society, and another flagrant violation of international humanitarian law. ...The Israeli government will never lift its blockade, dismantle its illegal settlements or withdraw from the West Bank and Gaza so long as it is given impunity and held unaccountable for its longstanding war crimes. But where is the international voice of the men and women of goodwill throughout the world? Only the relatively few campaign groups and engaged individuals raise their voice above the fray, or stand in solidarity with the oppressed Palestinian families who seek only an end to the penury and repression that dominates their lives."

Recommended reading/watching: Can U.S. Citizens End Israel's Legal Impunity? by Stephen Zunes in YES! Magazine; Elites Will Make Gazans of Us All, by Chris Hedges in Truthdig; US backing crucial to Gaza attacks, interview with Phyllis Bennis on Democracy Now!; The latest Gaza catastrophe, by Richard Falk in Al Jazeera.

Take Action for Gaza: Join Avaaz's campaign, Time for Palestine, that urges governments to endorse the legitimate UN bid for recognition of the state of Palestine. Also, support a campaign by War on Want urging the British Government to introduce a two-way arms embargo on Israel until it ends its violations of international law and Palestinian human rights. And join the Gaza protests on Saturday 24 November, 12 noon, for a march to the Israeli Embassy in London.

This was Black Friday - the busiest shopping day of the year in the United States following Thanksgiving Day, although not everyone was queuing outside the malls  and partaking in the bargain bin frenzy. Many people followed the advice of The Story of Stuff Project and avoided the shops to eat, play, hike, sled, craft, read.... or strike.

For the first time in the 50-year history of Wal-Mart, hundreds of workers took part in protests and civil disobedience actions at over 1,000 stores across the country. The longstanding cause of Wal-Mart employees is for better working conditions, living wages, the right to full-time work, and an end to retaliation for speaking out - basic demands that should not be too much to ask from a mega-corporation that posted an astonishing $3.64 billion in profits for the third quarter of this year alone. As reported in an article by radio host Rose Aguilar on Al Jazeera [Walmart and Black Friday protests], the Walton family has more wealth than the bottom 42 percent of American families combined. And in 2010, Wal-Mart's CEO had an annual salary of $35 million - giving him more pay for a single hour than a full-time employee makes in an entire year. Is it about time that Wal-Mart embraced the spirit of sharing?

A blog post at Food First [Workers tell Wal-Mart to get in line: Now it's time for the food justice movement to get in line with the workers] also points out that the fight against Wal-Mart is not just for labour rights, but is also crucial for the food justice movement. Wal-Mart's monopoly power leads to an oligopoly in the food system, the article explains, with dire repercussions for small and sustainable food suppliers, as well as for community health. Frances Moore Lappé also pondered what ‘food for all seasons' really means this Thanksgiving [Huffington Post: This Holiday, Give Thanks and Get Real (About Our Food!)], and urged everyone to make the choice to support local, family farms using sustainable practices; to demand a shift of public support from chemicals to ecologically-aligned farming; and to work to end the power of private wealth that corrupts political decision-making and the world's food system.

Slogan for the day, courtesy of Story of Stuff: ‘Sharing is better than shopping'.

Further reading/listening: Why You Shouldn't Shop at Walmart on Friday (and Why the Strike is Good for the Economy) by Robert Reich at RobertReich.org; Wal-Mart Accused of Threatening Workers With Retaliation Ahead of Black Friday Walkouts, Protests, on Democracy Now!

Recent research highlights what campaigners and progressive economists have long understood - that the austerity programmes being rolled out in virtually every member state of the European Union have failed to reach their stated objective of solving the debt crisis. Analysis by Julio Godoy for IPS news [How Austerity Plans Failed the European Union] highlights a range of recent studies on the higher unemployment and poverty rates that have now eventuated in every country of the region. Unsurprisingly, figures show that youth are being hit hardest by austerity measures, most notoriously in Greece where youth unemployment has more than doubled since 2008.

The theme of austerity is now reflected in various films and media, with The Guardian recently highlighting a series of observational documentaries showing life on the frontline of the recession, called Breadline Britain. The film-maker Peter Gordon explained in The Observer why he spent six months documenting the daily struggle and its effects among the marginalised in Yorkshire and the north-east of the country.

Also this week, the BBC have begun a debate called Why Poverty?, with a show-case of eight one-hour documentaries by award-winning filmmakers about poverty, inequality, aid and trade. See the impressive website at www.whypoverty.net and get involved with the debate. Before the Why Poverty? project went live this week, The Observer asked eight experts how they would alleviate the plight of the destitute, from Dambisa Moyo and Jeffrey Sachs to Frances Stewart and Camila Batmangheledjh.

The New Economics Foundation (nef) have also just published an investigation into the experiences of the UK government's austerity measures among some of the most deprived communities in Birmingham and London's Borough of Haringey [Everyday insecurity: Life at the end of the welfare state]. This latest briefing paper continues the nef's work on the impact of unprecedented cuts to the budgets of local authorities in Britain, and shows how charities and communities are under growing pressure to step in where the state has withdrawn. The case studies present a foreboding glimpse into how life will change for many people in England's most deprived communities as a result of reforms to welfare and cuts to public services - the full impact of which have yet to be felt. In the longer terms, says nef, "social crises are likely to build up leading to unsustainable human, social and economic costs".

So what should we cut?

The budget battle in Brussels has taken place this week, with the EU's 27 member countries meeting to decide how to juggle public funds in the face of widespread austerity, a sinking Euro and sovereign debt crises. In the clash of national self-interests among richer and poorer nations, it was unsurprising that the EU summit broke down without agreement over the budget. So what's the chances that EU leaders will scale up and strengthen the global sharing economy as they begin a grinding round of new negotiations over the coming few months to agree the next seven-year budget?

As detailed in the 10 sections of STWR's recent report on ‘Financing the Global Sharing Economy', there are plenty of alternative measures that governments could take in order to reverse austerity measures and tackle poverty and climate change - from tax and debt justice  to redirecting perverse government subsidies. But as the report emphasises, forcing governments to implement even these modest proposals will require massive public support if they are ever to become a reality.

Recommended reading: Budget battle in Brussels, by Avaaz Team; EU's aid budget facing cuts despite evidence it will pay for itself by 2020: Campaigners warn reducing European development fund by 11% would leave world's poorest 'paying the highest price', by Mark Tran of The Guardian's Global development team.

Jersey puts stop to vulture funds circling its courts, by Rupert Neate in The Guardian.

Inside the Rolling Jubilee, the First P2P Bailout, by Willie Osterweil in Shareable.

Recap of Global Sharing Day 2012, by Cat Johnson in Shareable.

Why pro-market solutions to poverty don't always work, by Deborah Doane in the New Internationalist.

51 (Mostly) Simple Ways to Spark a Commons Revolution, by Jay Walljasper in On the Commons.

Friedman Seminar Series: The Right to Food: A Weapon Against Global Hunger. Tuesday 27th November, with Olivier de Schutter, UN Special Rapporteur on the Right to Food. To be held at the ASEAN Auditorium The Fletcher School, 160 Packard Ave., Medford, MA 02155 USA. The event is open to the public and will be webcast live.

Filed under:
War and conflict

Article: Gaza: a cry for justice
The real path to peace in the Middle East, requiring the establishment of a fully sovereign Palestinian state on the West Bank and Gaza, is dependent on...
Blog: Time to end the Gaza blockade - 9 years on
As the blockade imposed by Israel approaches its 9th anniversary, it continues to devastate the lives and livelihoods of 1.8 million Palestinians living...
Printer-friendly version