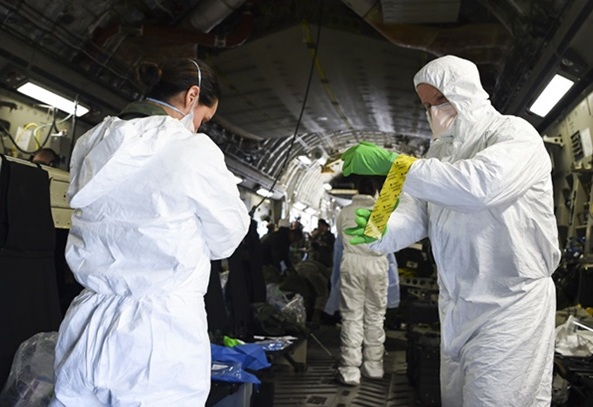 If the coronavirus has any positive impact, let it prompt us to learn the limitations of the market and the urgent need for regulation, taxation and public services, says Nick Dearden for Al Jazeera.

People might think that pandemics are great levellers: in a crisis, no matter how rich you are, you are as likely to die from a contagious disease as anyone else.

But this is far from true, and while deadly diseases are of course a major worry for us all, the impact on those who are poorer is much heavier.

They are more at risk; disease will take a bigger toll on their lives and if they do succumb, they are less likely to recover.

Spiralling inequality has become a scar on our world, and is at the root of so many of the problems humanity faces. The current coronavirus epidemic is exposing that inequality afresh.

Furthermore, that inequality will be driven to new heights by some of the proposals that have been put forward to solve the crisis, including the promotion of financial markets, big healthcare and pharmaceutical corporations.

In China, where the latest variant of coronavirus, COVID-19, was first reported, the impact of food price rises and economic slowdown have already been felt most acutely by the poorest. While the elite and middle classes are more likely to be able to work from home, to afford a period without earning and to rely on other (often poorer) people to deliver everything they need to their doors, these options are not available to those already struggling to make ends meet. In rural areas, some farmers are facing devastation and the Chinese leadership has been warned that the virus will prevent its anti-poverty goal being reached this year.

The whole purpose of state provision of healthcare is to remove the demands of the market from our ability to enjoy a healthy and dignified life. But years of austerity, even in rich countries, have eroded public services and the welfare safety net.

This means that even developed health systems in Europe will struggle with the virus, and an individual’s wealth will dictate how well insulated they are from contagion.

But in countries without proper state provisions, the situation is far worse. Insecurity of employment and a lack of social safety nets, mean many workers in the United States, where healthcare is insurance-based, are simply unable to follow safety advice like staying away from work or talking to their doctor.

The US suffers from the most inefficient health system in the developed world, according to a 2014 report from The Commonwealth Fund, an independent research organisation focusing on healthcare. Despite being the most expensive, the US healthcare system delivers the worst health outcomes of any industrialised country.

Recently, people worried about coronavirus have been charged thousands of dollars for basic tests to rule out infection, a situation that contrasts sharply with many European countries where testing is free at the point of use, and universal.

When we add into the equation the likelihood of retail and catering jobs being among the most insecure, where people are least likely to be able to take time off or admit to feeling ill, and also where many of these roles are public-facing, we find exactly the conditions that will promote the rapid spread of the disease.

And while even public healthcare systems can struggle with preventive medicine, there is a built-in disincentive to prevent illness in a system where illness equals profit.

The most immediate hope lies in the production of a vaccine for the virus and public money is being pumped into research around the world by national research institutes and nonprofit bodies.

But there is a problem – the way the global pharmaceutical industry works means it is disinterested in finding vaccines for epidemics. Big pharmaceutical corporations make their profits largely from developing drugs for chronic conditions which have a vast, long-term market among people (or institutions) able to pay for them.

Companies then sit on decades-long patents, infamously spending more on marketing their current drugs than researching new ones. An epidemic is far too uncertain to justify Big Pharma’s time, as we can see from the way SARS (another form of coronavirus) research was dropped as the epidemic waned, a tragedy because it could have helped enormously with locating treatments for COVID-19.

This is especially disgraceful when so much medical research is already effectively funded by the state: between one-third and two-thirds of research funding globally comes from the public purse. The scandal is that so much of this research is then handed over to Big Pharma, which finalises, manufactures and markets the drugs. Again, the public bears the cost while big corporations sit on the profits.

According to Public Citizen, a non-profit consumer advocacy group based in the US, the US National Institutes of Health has already spent $700 million on research into the disease, yet sadly no conditions have been imposed to ensure that everyone can get access to the treatments produced.

In turn, vast swaths of the world’s population are effectively priced out of being able to access new drugs when they are produced. Even for those of us lucky enough to enjoy a public health system, the cost of new drugs to that system can be eye-watering.

In developing countries, the situation may become dire. Fortunately, the spread of the virus throughout Africa has been slow to date. This is good because nowhere will the inequalities of the pandemic be seen more starkly. If public healthcare, decent jobs and welfare are key to reducing the impact of the disease, many African countries will struggle.

Former World Bank employees have made clear that the answer to mitigating pandemics is better public healthcare facilities within countries. This allows better prevention and the ability to act quickly when crisis strikes.

Yet, despite awful recent epidemics like Ebola, market solutions are still being pushed by donors onto poorer parts of the world. One “innovative” approach the World Bank has established to deal with pandemics like coronavirus is the issue of “pandemic bonds".

These bonds are bought by hedge funds and pension funds initially from the World Bank, but then on secondary markets, and pay out a high rate of return to investors - until a pandemic strikes. At that point, the bond investment is used to support low-income countries to tackle the outbreak.

But, in order to sell such pandemic bonds, the World Bank has had to make the terms so favourable that to date they have never been triggered, even during the Ebola crisis. Although they might be triggered this time around, the amount released is likely to fall well short of the funds needed.

As the crisis heightens, the value of the bonds is plummeting, but rich investors have been handsomely paid out in interest and premiums in the meantime, at the expense of public purses which were supposed to be used to fight poverty.

This is a wonderful example of how “development” professionals can tie themselves in knots to achieve the impossible: persuading financial markets to solve the problems of the world. Financial markets have little interest in supporting the development of public healthcare capacity, because it only profits them indirectly, if at all.

Over at the International Monetary Fund, more substantial help is on offer: loans to help countries cope with the pandemic. But these loans will need to be repaid, and they do not help build sustainable health systems.

The IMF’s policy diktats are a key reason why countries have not developed better public health systems. Their pro-market, pro-austerity ‘structural adjustment’ demands from the African debt crisis in the 1980s onwards have drained many African countries of their ability to build more equal societies.

It is very positive that collaborative research into contagious diseases such as coronavirus is underway, but finding a solution will take time, and we need to be looking at long-term research capable of helping with the next epidemic.

Even if coronavirus is less serious than feared, our society is vulnerable to future pandemics, unless we resolve some of the fundamental problems preventing us from tackling inequality and ensuring universal healthcare.

Left to its own devices, the market is not capable of solving some of the most serious crises humanity faces. If the coronavirus has any positive impact, let it prompt us to learn the limitations of the market and the urgent need for regulation, taxation and public services.

Trusting speculators to help solve a global crisis will surely only fuel the footloose markets that are already driving up inequality. The World Bank should be helping countries to tax big business to pay for solutions and services instead.

Article: Financing Health and Education for All
An extra $50 billion or so per year could help ensure that children everywhere have access to basic health care and schooling - a sum that could easily be...
Article: ‘Health for all’: the second dawn
It may seem that the goal of universal primary health care - in which state capacities are strengthened to ensure the rapid expansion of free publicly-...
Article: What happened to the WHO’s social justice project?
The solution to the problem of resources for health is not for public bodies to go begging to the private sector or to celebrity philanthropists. The...
Report: WHO estimates cost of reaching global health targets by 2030
The SDG Health Price Tag, published in The Lancet Global Health, estimates the costs and benefits of progressively expanding health services in order to...
News: European action day against the commodification of health
Every year, different networks of trade unions, citizens’ groups, NGOs and social movements organize a series of actions in several European cities for...
Printer-friendly version