With Coronavirus spreading, time to repurpose the arms industry to meet human need 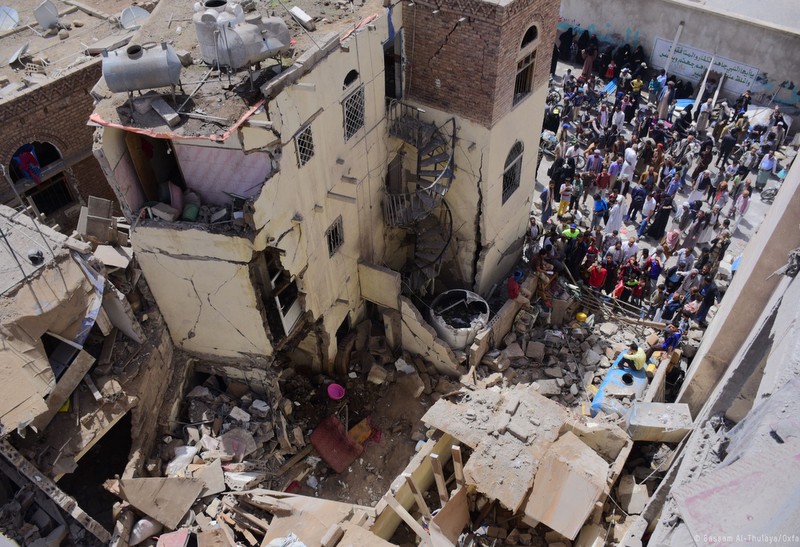 What if more of the arms and defense sector moved into manufacturing health and other products permanently? Surely this is the time for a focus on what peace and security really mean for us all, writes Martin Butcher for Oxfam International.

All over the world we have radically changed our ways of life as the devastating spread of coronavirus transforms our communities.

Governments’ priorities have changed overnight, things that seemed impossible only weeks ago are now seeing urgent action. Homeless people have been rehoused quickly. Passenger planes whose flights could not possibly be reduced in the face of climate breakdown are suddenly grounded. Across the world companies are repurposing production to make masks, ventilators and sanitizers.

The arms industry too could be transformed, using its highly skilled work-forces for social good, instead of the weapons which fuel conflict, humanitarian crises and human rights abuses.

Annual military spending is now $1.8 trillion, whereas the Global Preparedness Monitoring Board (GPMB) (a project established by the WHO and World Bank) has called for $8 billion to be made immediately available to low income countries to fight the virus. Oxfam has warned half a billion people may be pushed into poverty, many living in countries where the impact of the arms trade is felt. From Yemen to DRC to Palestine, women, men and children need urgent health services, not guns and bombs. 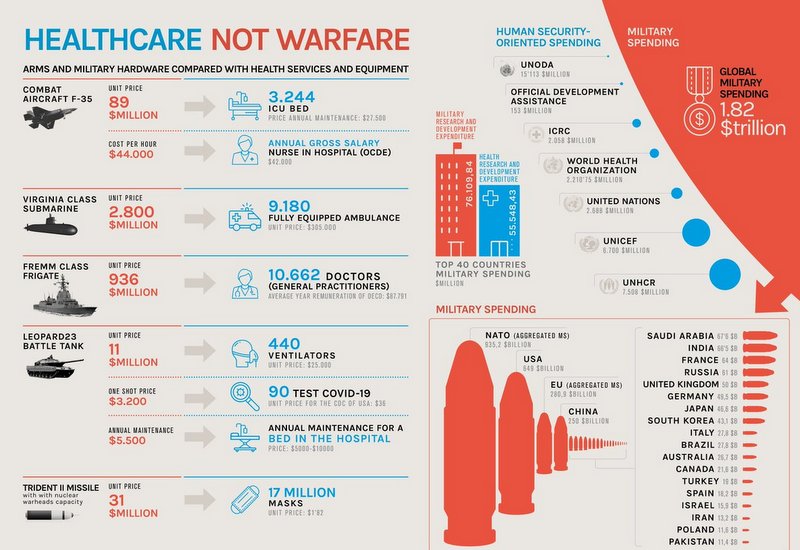 What if more of the arms and defense sector moved into manufacturing health and other products permanently?

Beyond the obvious products like filters and suits used in electronics production, there are many other aspects too that could be re-purposed or diversified. In the UK trade unions, long concerned about job cuts in a declining industry, have argued for diversification. Supply chains and high skilled workers could be utilised into socially useful sectors. This could include alternative energy, civilian aircraft, shipping and other vehicles, fire-fighting equipment, food distribution and electronics. Drones that deliver missiles can be re-purposed to deliver food and medicines to remote areas.

Switching high tech investment and workers into solar, wind and other green energy would meet a human and environmental need rather than creating ever more threats to human life. Campaigners have proposed ideas to pay for this transformation, such as #FreezeWeapons which would free up money with a moratorium on production and supply of arms.

3D printing has become an integral feature in parts of the arms industry, producing spare parts and components in particular. Academics from Oxford University have combined to quickly develop the OxVent, a ventilator simple to assemble and operate, that can be made for $1,200. 3D printing of such equipment could solve problems of difficult and costly supply chains in poorer countries to improve healthcare provisions beyond the current crisis.

For many decades, the arms industry has been championed by governments the world over as essential for peace and stability. But as the world faces great peril, it is frontline workers in health, food distribution, sanitation and transport that we need most.

Governments will argue that weapons are necessary for defense and maintaining law and order and the arms manufacturing sector has argued that it is demand driven. Yet many parts of the industry have required government subsidies to remain profitable, and governments are their main customers. Stocks are hardly low — police and militaries hold over 150 million firearms. The UN Secretary General’s call for a global ceasefire is getting support from both governments and the general public.

Surely this is the time for a focus on what peace and security really mean for us all.

This would support the Global Ceasefire, it would also support Sustainable Development Goals as countries strives to overcome the global inequalities that fuel conflict. Lack of access to healthcare is just one such inequality, with 50% of women in developing regions lacking basic healthcare, with multiple negative consequences for communities. Despite these challenges, women are playing a positive role on the front line, brokering local ceasefires, and building peace. Transforming the arms trade could lead to a more just and equal society.

The concept of transforming the arms trade is hardly new: the much-quoted Let us beat swords into plowshares is from Isiah in the Old Testament. Amidst such a global existential moment, this is the opportunity for a sector to join the radical rethink and re-purpose for the common good.

Martin Butcher is Policy Advisor on Conflict and Arms at Oxfam.

Anna Macdonald is a Human Rights Practitioner in Residence at Columbia Law School and previously Director of Control Arms.

Filed under:
Poverty and hunger, Inequality, Environment, War and conflict

News: 'Price of conflict is too high': hunger at crisis levels in eight countries
The number of hungry people living in conflict zones is rising, with eight countries recording crisis or emergency levels of food insecurity in at least a...
News: Link between conflict and hunger worldwide, ‘all too persistent and deadly’, says new UN report
Conflict-driven hunger is getting worse, according to a snapshot of the eight places in the world with the highest number of people in need of emergency...
Article: Is now the moment for a standing UN ‘911’ service?
With a “UN 911” first responder for complex emergencies, the UN would finally have a rapid, reliable capacity to help save millions of lives and trillions...
Page: Conflict over resources
As nations struggle to secure the world’s untapped natural resources, humanity is faced with an unavoidable choice: either to find ways of equitably...
Printer-friendly version