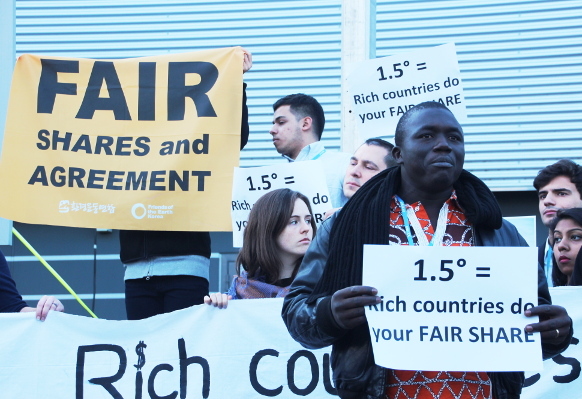 Limiting global warming to 1.5°C will require major disruptive shifts, which people will tolerate only if they believe that everyone is sharing in the sacrifice, the wealthy and powerful included. A review of recent climate change reports, by Sam Pizzigati at Inequality.org.

We either keep fossil fuels in the ground, or all of us are going to fry. So essentially posits still another new blockbuster study on climate change, this one just published in the Proceedings of the National Academy of Sciences. Our fossil-fuel industrial economy, the study details, has made for the fastest climate changes our Earth has ever seen.

“If we think about the future in terms of the past, where we are going is uncharted territory for human society,” notes the study lead author Kevin Burke from the University of Wisconsin.

“In the roughly 20 to 25 years I have been working in the field,” adds another researcher on the effort, Wisconsin’s John Williams, “we have gone from expecting climate change to happen, to detecting the effects, and now, we are seeing that it’s causing harm,” as measured in property damage and deaths, in intensified flooding and fires.

The last time climate on Earth saw nearly as drastic and rapid a climate shift, scientists relate in another new study published in the journal Science, came some 252 million years ago, and that shift unfolded over the span of a few thousand years. That span of time saw the extinction of 96 percent of the Earth’s ocean species and almost as devastating a loss to terrestrial creatures.

Other scientific studies over this past year — most notably an October report from the Intergovernmental Panel on Climate Change that warned we have a dozen years to avert a climate catastrophe — have made similarly alarming observations and together provided an apt backdrop for this month’s United Nations climate change talks in Poland.

Researchers had hoped these talks would stiffen the global resolve to seriously address the climate change crisis. But several nations had other ideas. The United States, Russia, Saudi Arabia, and Kuwait have all refused to officially “welcome” the findings of the blue-ribbon Intergovernmental Panel on Climate Change, essentially throwing a huge monkey-wrench into efforts to mobilize a fitting global response.

What unites these four recalcitrant nations? One key characteristic stands out: The United States, Russia, Saudi Arabia, and Kuwait all just happen to rate among the world’s most unequal nations.

Just a coincidence? Absolutely not, suggests a new analysis from the Civil Society Equity Review coalition, a worldwide initiative that counts in its ranks the Climate Action Network International, 350.org, and scores of other global, regional, and national groups committed to averting a climatic cataclysm.

Limiting global warming to 1.5°C — the goal the global scientific community now sees as the absolute least we ought to be striving to achieve — will require, the Civil Society Equity Review analysis explains, “disruptive shifts” and heighten “anxieties about loss, displacement, and social insecurity.”

People will tolerate these disruptions, the analysis continues, but only if they believe that everyone is sharing in the sacrifice, the wealthy and powerful included.

Over recent years, environmental policy makers have essentially defined the wealthy at the level of the nation state. The focus has been on the relationships between wealthy nations and developing nations still struggling to amass wealth. Wealthier nations, the climate change consensus has come to understand, have a responsibility to help poorer nations meet the environmental challenges ahead.

But the new Civil Society Equity Review report — After Paris: Inequality, Fair Shares, and the Climate Emergency — argues that we need to expand our focus from inequality between nations to inequality within nations as well.

“If we are to achieve the critical outcome of limiting global temperature rise to 1.5°C, the wealthy (individuals and companies) in all nations must take the greatest action to both reduce their own emissions and to support the global transition,” After Paris stresses. “The wealthy must not be able to hide from their responsibilities.”

The more unequal a wealthy society, the greater the power of the rich — and the corporations they run — to do that hiding. And the inequality their wealth engenders, After Paris adds, also has “much to do with the dark character of the current political moment,” the growing levels of xenophobia and racism that make serious environmental aid from developed to developing nations ever less likely.

“The greatest effort of the climate transition must ultimately be borne by the people who have the wealth,” the new Civil Society Equity Review analysis concludes, “and this has to be true both within countries and between them.”

The wealthy and their corporations, left to their own devices, would for the most part rather not bear any sort of significant transitional sacrifice. How best to get them to meet their responsibilities — and help lighten the “dark character of the current political moment”? One stab at that necessary political project has just come from Thomas Piketty, the world’s most famous inequality analyst, and over 50 other economists, historians, and former elected leaders from throughout Europe.

These thought-leaders have issued a “manifesto for the democratization of Europe” that sees the current institutions of the European Union stuck in “a technocratic impasse” that benefits only the rich. The manifesto — published earlier this month in seven major European media outlets — calls for a new European Assembly with an $800-billion annual budget financed via increased taxes on corporate profits and the income and wealth of the EU’s most affluent, plus a new tax on carbon emissions.

Steps like these could help ease the way for a serious offensive against the ravages of climate change. But many more such steps will be necessary, as Basav Sen, the climate justice director at the Institute for Policy Studies, reminds us.

“Addressing climate change effectively and justly,” sums up Sen, “requires us to transform the unjust social and economic systems that gave us climate change in the first place.”

Report: The intersection of politics and spirituality in addressing the climate crisis
The following interview with STWR’s founder, Mohammed Sofiane Mesbahi, examines both the contemporary political and profounder spiritual implications of...
Report: After Paris: countries are not paying their fair share
A review of climate targets and commitments by each country has been released during the UN climate conference in Poland.
Report: Equity and the ambition ratchet
Share The World's Resources is one of many signatories to the latest Civil Society Equity Review, which proposes a policy framework for a fair sharing of...
Printer-friendly version