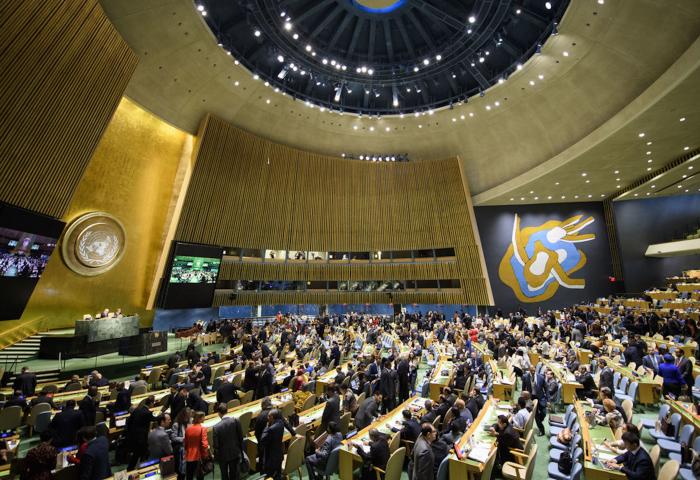 The 751-member European Parliament (EP) in Strasbourg has called on the European Union (EU) to extend its support for the establishment of the proposed new body — specifically with a resolution before the upcoming 73rd session of the 193-member UN General Assembly (UNGA), which begins in mid-September.

The EP has also called for an equally ambitious “UN Reform Summit” in 2020 — a meeting of world leaders–to boost another long-pending proposal for the restructuring of the United Nations, including significant changes in the composition and functioning of the 15-member UN Security Council (UNSC).

The proposed reform of the UNSC has been under negotiations for over 20 years now — with no tangible success.

A resolution adopted in Strasbourg last week states that a “United Nations Parliamentary Assembly (UNPA) within the United Nations system” should serve “to increase the democratic character, the democratic accountability and the transparency of global governance and to allow for better citizen participation in the activities of the UN.”

Andreas Bummel, executive director of the non-governmental organization (NGO) Democracy without Borders, welcomed the resolution of the EU Parliament as an “important initiative”.

“Multilateralism and democracy are under attack worldwide. A democratization and strengthening of the UN must be part of the countermeasures,” he said.

Asked if the proposed parliament will conflict with the UNGA, he told IPS: “No. The UNPA is conceived of as an additional and complementary body. In fact, we propose that it should be set up by the UNGA as part of the UNGA’s revitalization according to Article 22 of the UN Charter.”

Bummel also said the international campaign for a UN Parliamentary Assembly, which is being coordinated by his NGO, is supported by over 1,500 members of parliament from more than 100 countries as well as numerous scientists, former UN officials and personalities.

Explaining further, he said: “Please note that the European Parliament’s support is not the same as such of the EU” (which comprises 28 member states representing over 510 million people in Europe).

The European Parliament calls on the EU’s governments to support. In previous years, he said, Malta and Italy showed an interest and more recently Ireland.

The proposal is also being backed by several international NGOs.

Mandeep Tiwana, Chief Programme Officer at the Johannesburg-based CIVICUS, a global alliance of civil society organizations, told IPS: “We support the call for a UN Parliamentary Assembly. We had argued in our 2014 State of Civil Society Report on ‘reimagining global governance’ that there’s a currently a double democratic deficit that manifests itself at the international level”.

In many parts of the world, he warned, “inclusive democracy is being subverted at the national level by authoritarian regimes and divisive political leaders”.

He pointed out that these very entities then get to make decisions on behalf of their people at the UN where already people’s access and ability to input in decision making is limited.

In any case, a UN Parliamentary Assembly will be an opportunity for people to directly interface with international decision making which increasingly impacts their lives at the local level, he added.

Jens Martens, executive director of the Global Policy Forum based in Bonn/New York, told IPS that in times of rising nationalism and authoritarianism, all efforts to strengthen the UN and democratic multilateralism are highly welcome.

The proposed UN Parliamentary Assembly can be an important element within a UN reform package if it complements the necessary strengthening of civil society participation in the UN.

However, he noted, this kind of governance reforms remain symbolic window dressing as long as the UN does not receive the necessary financial resources to fulfil its mandate and is strengthened in key areas of global policy, including tax cooperation and the regulation of transnational corporations.

Martens said Global Policy Forum supports the call for a “2020 UN Reform Summit”. The 75th anniversary of the UN provides a new opportunity for strengthening and renewal of the institutional framework for sustainable development in the UN.

Meanwhile, a recently-published book by Jo Leinen MEP and Bummel titled “A World Parliament: Governance and Democracy in the 21st Century” features the history, relevance and implementation of the world parliament proposal arguing that a UNPA would be the first step.

The European Parliament and its members have been vocal about their strong support for the proposal.

Jo Leinen MEP (Germany), was quoted as saying, : “The UN urgently needs more openness and a stronger democratic foundation. The European Parliament therefore calls for the establishment of a Parliamentary Assembly within the United Nations system. The European Union and its Member States should now play an active role in the implementation of this innovation.”

According to Eugen Freund MEP (Austria): “The reform of the United Nations has accompanied me for much of my life. I first encountered it when I was at the UN in New York in 1978, forty years ago. Unfortunately, not much has changed since. The General assembly has more members now, but it is still a body of unelected diplomats.”

Therefore, he argued, the idea of eventually complementing them with elected parliamentarians is a very appealing one.

“They would certainly be closer to the populace and thus would have to regularly answer their constituency. Whether that would also streamline the decision making processes remains to be seen.”

Daniel Jositsch MP (Switzerland) said: “The escalating crisis in international cooperation shows that new ways must be found to combat global problems. It is therefore very positive that the European Parliament is calling on the European states to speak out in favour of the creation of a UN Parliament. It is important that they will not simply pay lip service to this goal, but that concrete implementation measures are being taken.”

There has also been support from outside Europe.

And, according to Fernando Iglesias MP (Argentina), “From the many initiatives in favor of a more peaceful, fair and democratic world the creation of a UN Parliamentary Assembly is the decisive one. The recent support given by the European Parliament to this proposal shows that the members of the most important supranational parliamentary body are ready to work for its creation.”

The writer can be contacted at thalifdeen@ips.org

Article: Reclaiming the UN's radical vision of global economic justice
The Universal Declaration of Human Rights is one of the most translated and celebrated documents in the world, marking its 70th anniversary this year. But...
Report: ‘Harmony with Nature’ dialogues at the United Nations
Since 2009, a series of expert dialogues at the General Assembly of the United Nations has sought to define a new worldview based on a non-anthropocentric...
Article: Philanthrolateralism: Private funding and corporate influence in the United Nations
In order to make the UN system really ‘fit for purpose’, member states and UN bodies have to take bold action to overcome selective multilateralism, the...
Report: Reinventing development: Reforming the UN for people and planet
Transformational changes are needed to make the UN into a body that advances the public interest through democratic governance and commitment to its...
Article: International politics and global governance: key facts and further resources
Some key facts, organisations, books and further resources that relate to international politics and global governance issues.
Printer-friendly version