Paying for the pandemic and a just transition 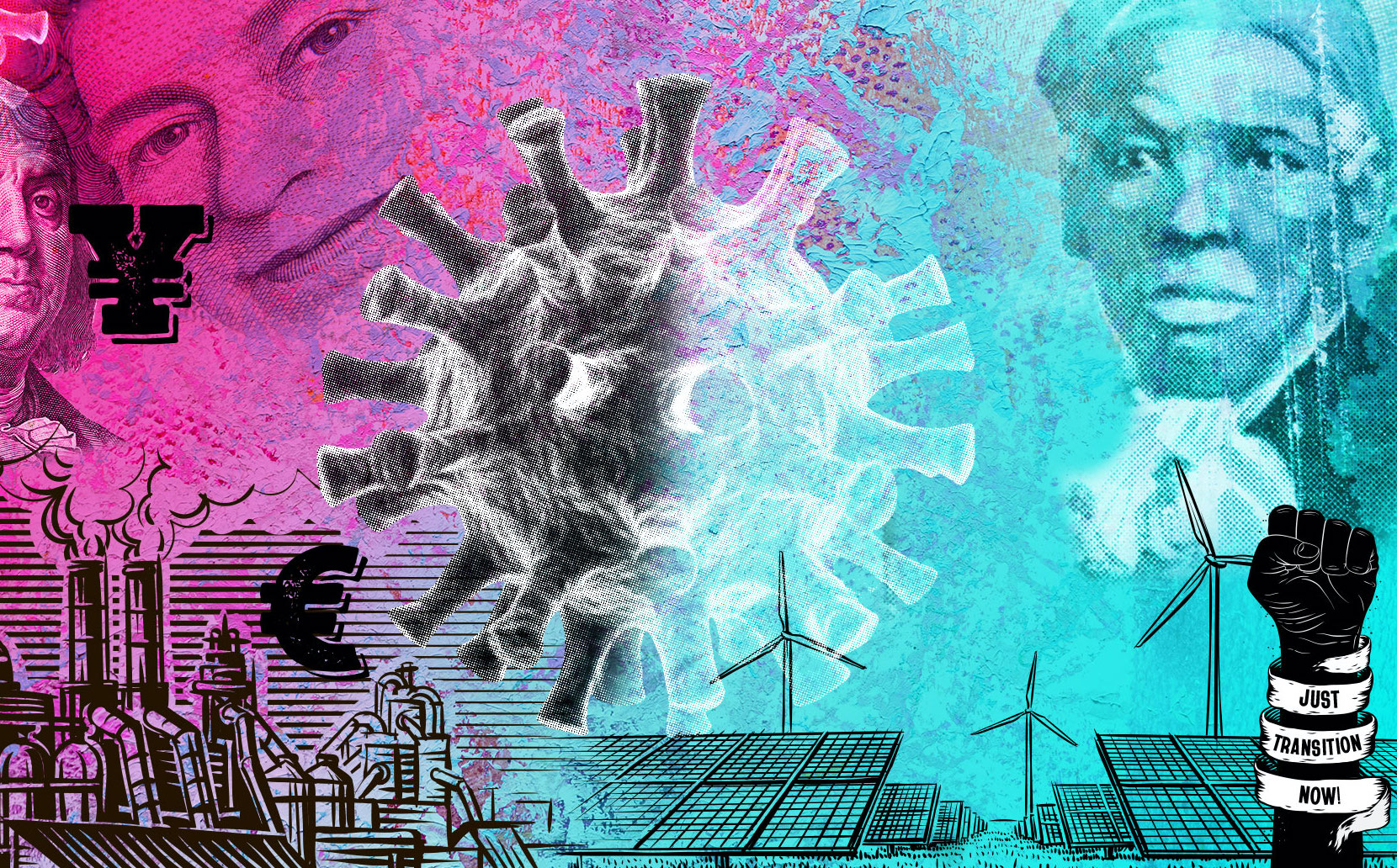 The Transnational Institute sets out ten proposals to mobilise resources to cover the cost of the global COVID-19 pandemic and to pay for the transition away from the fossil fuel economy.

California has this year seen the largest forest fires on record. The smoke, whipped up by the flames, made it impossible for people to go outside without harming their lungs. Yet, due to the COVID-19 pandemic, meeting friends and family inside, and away from the smoke, risked catching the disease. Despite living in the richest state in the most powerful country in the world, its citizens were stuck, caught between two globally systemic crises – a spreading fire amongst a spreading virus.

This type of Catch-22 situation is not new for many around the world, particularly those in the Global South, who have long had to navigate the harsh realities of a broken international financial system and climate breakdown. The same month that fires raged in the USA, Bangladesh suffered the heaviest rainfalls in a decade, leaving a third of the country underwater. In the words of the Prime Minister Sheikh Hasina, ‘Bangladesh is trying to save lives, shore up healthcare systems, and cushion the economic shock for millions of people, all while avoiding fiscal collapse. But this is not a cry for help; it is a warning.’

Whether it’s rehousing millions of displaced people in Bangladesh, or injecting trillions into the global economy to keep things afloat during the pandemic, the costs of these crises will continue to mount. As the debts rise, many will be asking, “Who is going to pay for all this?”

This report answers this question by bringing together ten progressive proposals that could pay for the costs of the pandemic and finance a just transition to a better world. In the words of economist Jayati Ghosh, this transition requires a “global multicoloured new deal: red, green and purple”. Red – to fight against extreme wealth inequality, consolidation of corporate power and global poverty. Green – to prevent the imminent breakdown of ecological systems. Purple – to put essential care work at the center of our economic value system, acknowledging that working-class women across the world carry the heaviest burden of these crises.

This report starts by looking at the costs of COVID-19 and estimates of what finance we would need to implement some of this multicolored new deal, before outlining ten progressive proposals that could cover these expenditures. What makes these proposals progressive is that they are designed to make those with the broadest shoulders pay.

The figures are put together from pre-existing policy proposals from international organizations, think tanks, academics and social movements. Some of these estimates are generally conservative and easier to implement. Meeting commitments to justice and fairness would require higher tax rates, more debt cancellation and further fiscal spending. Other proposals are more ambitious, and are only in their embryonic stages of development. These proposals reflect the orders of magnitude of potential funds rather than a specific program of action.

Due to low interest rates and a lack of capacity in the economy, even the IMF now agrees that rich governments who control their own currency can increase spending without having to increase taxes. This is a welcome departure from the false austerity narrative of the past 10 years, that the books always need to be balanced. It follows that rich governments should spend whatever is needed today, while designing and coordinating new taxes that in the future can reduce inequality and take purchasing power out of the hands of the rich. This unconstrained ability to spend your way out of a crisis, however, has never been open to countries in the Global South. The recent legacy of neoliberal policies and the longer history of colonial inequality has left many low-income countries unable to properly run their health and economic systems, showing the desperate need for the reforms set out in this report.

Lastly, raising finance is not sufficient to delivering systemic change to our unjust global economy. To ‘build back better’, more than just money will have to be mobilised. This report points throughout to examples of structural change that could start to change the balance of power away from a small financial elite towards a more democratically-controlled economy. The aim of the report is to present aggregate figures while also highlighting real life examples that can act as a blueprint for a future that treats humanity with equity and dignity. Ultimately, the $9.457 trillion a year headline figure drawn from these proposals show that moving towards a just world depends on political power rather than availability of financial resources. 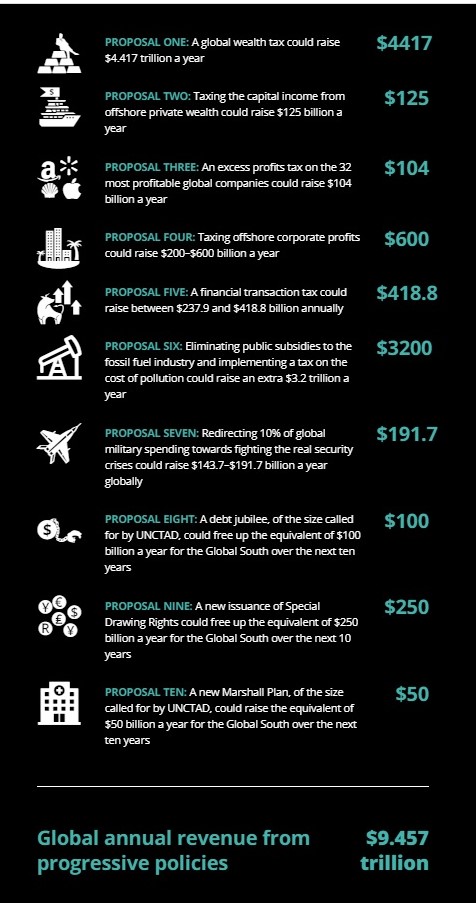 Blog: Contribution to GTI Forum: Has the time come for a universal basic income?
In a forum discussion by The Great Transition Initiative, two panels debate the question: Should a UBI be a central element of strategies for...
News: Over 1,000 health professionals call for G20 to cancel developing countries’ debt
Over 1,000 health professionals from 66 countries have signed a letter urging the G20 to cancel the debt of developing countries, ahead of an...
Blog: Why we need a new economic model centred on human rights
'Amid a pandemic that has taken over a million lives, we urge the same level of imagination as the drafters of the Universal Declaration over seventy...
Article: It's official, the global economy is a 'debtor's prison'
As the World Bank and IMF sound the alarm on debts driven sky high by Covid-19 in some of the world’s poorest nations, debt ‘relief’ will not cut it – we...
Blog: Global poverty soars as incomes of world’s billionaires hit new highs
The phenomenal rise in extreme poverty -– for the first time in 20 years — has been accompanied by an upsurge in the incomes of the world’s billionaires...
Printer-friendly version