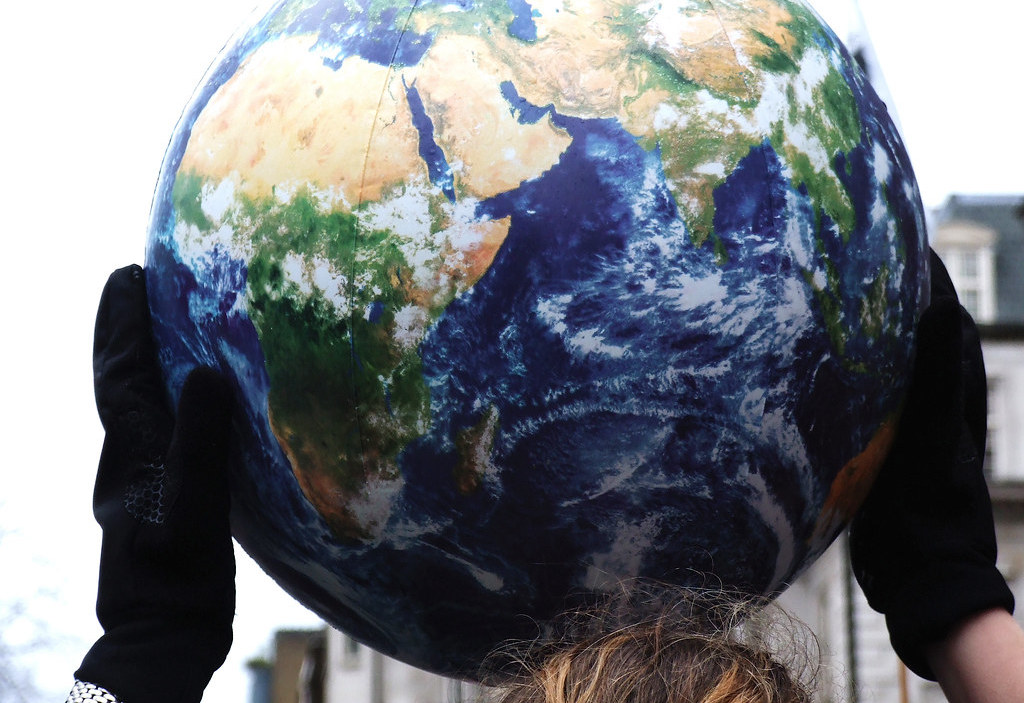 The drive for continuous economic growth is the fatal flaw in the UN's plan to end poverty and save the planet, writes Joan Martinez Alier and Nick Meynen.

The most ambitious internationally agreed plan to make this world a better place are the 17 Sustainable Development Goals (SDGs). But during their annual review, nobody dared to admit that the SDG that calls for sustained economic growth is fatally flawed, undermining the possibility to achieve the other SDGs.

Agreed by all nations back in 2015, the SDGs set a course of action until 2030. However, just the word ‘Development’ implies there is a single good path of change for all countries. Great minds like Arturo Escobar, Wolfgang Sachs, Gustavo Esteva and many others have argued against this idea for at least 30 years. That makes the Sustainable Development Goals slightly problematic by name. But there is a bigger problem with one of the 17 goals: SDG 8. This goal calls on all nations to go for sustained economic growth. That’s neither desirable nor sustainable.

SDG 8 is the fatal flaw within the SDGs. By taking this trojan horse in, the other SDGs will not be achieved. During the recent High-Level Political Forum (HLPF) at the United Nation’s (UN) headquarters in New York this was clear for all who were willing to see it, but very few dared to face this inconvenient truth.

SDGs: No climate of change

The most obvious incompatibility is between SDG 8 and SDG 13. The latter aims to ‘combat climate change’. The concentration of carbon dioxide in the atmosphere due mostly to the burning of dirty fuels continues to grow steadily (see Figure 1). The Kyoto (1997), Copenhagen (2009) and Paris (2015) agreements nor the first 4 years of the SDGs “2030 Agenda” register as a trend change on the Keeling curve. 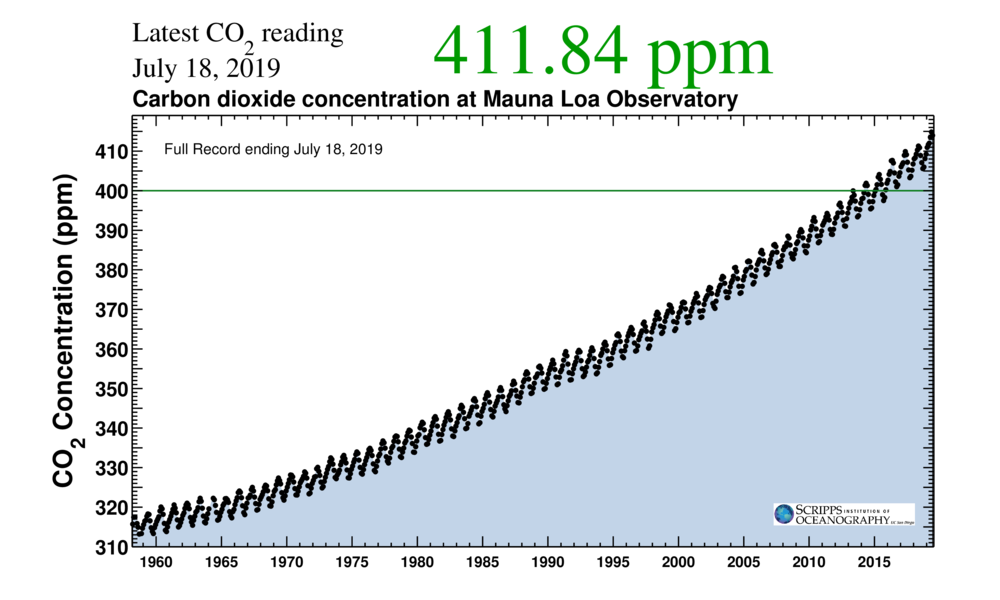 Let’s be clear. The link between burning fossil fuels, rising CO2 concentrations in the air and rising temperatures on the ground was made in 1896, by Svante Arrhenius. By the 1970’s companies like Exxon knew that burning fossil fuels causes dangerous climate disruption, but they decided to manufacture doubt. International commitments to prevent the climate chaos we are already in were made in the 1990s and ever since there has been only one year in which global emissions declined: 2009. That was also the only year in decades in which GDP declined.

Decoupling economic growth from environmental harm is a fairy-tale

The concept of green, sustainable or ‘decoupled’ economic growth is based on the belief that expansion of the economy is possible without an accompanying increase in environmental harm. This idea gained political acceptance in the past decade.

However, all data show that there is no evidence supporting the existence of a decoupling of economic growth from environmental pressures on anywhere remotely close to the scale needed. This is one conclusion of the new report ‘Decoupling Debunked: Evidence and arguments against green growth as a sole strategy for sustainability’, produced by 6 scientists for the European Environmental Bureau. It is far from the only study that comes to this conclusion but it puts an unprecedented challenge to those who claim that decoupling justifies a continuation of the pursuit of GDP growth, even in a ‘green’ variety.

The authors write that there are at least 7 reasons why sufficient decoupling is extremely unlikely to ever happen: rising energy expenditures, rebound effects, problem shifting, the underestimated impact of services, limited recycling potential, insufficient and inappropriate technological change, and cost shifting. They give enough and convincing arguments for each of these 7 reasons to justify their Loch Ness monster on the cover of their report: sufficient decoupling as a mythical creature of the mind.

The objective of SDG 8 is to “sustain per capita economic growth in accordance with national circumstances and, in particular, at least 7 per cent gross domestic product growth per annum in the least developed countries.” This is supposed to magically happen by “improving progressively, through 2030, global resource efficiency in consumption and production and endeavour to decouple economic growth from environmental degradation ….” Never mind that whatever efficiency gains humanity made so far did not resulted in any decrease in total fossil fuels consumption.

As policymakers clearly fail to stop the rise of burning dirty fuels, they have tried to ‘make up’ by finding additional carbon dioxide sinks. This resulted in things like REDD(Reducing Emissions from Deforestation and forest Degradation) schemes that usually displace peasants and tribal peoples under the banner of being a climate solution. These ‘solutions’ are new problems. They don’t stop the march towards the commodity extraction frontiers to get hold of energy and materials sources that should be called “unburnable” and “unextractable”. Even a non-growing industrial economy would continue to be untenable because most energy is not recyclable and the circularity of the global economy is only 6% or 9%, depending on how you measure. The industrial economy is not circular but entropic, as explained by Nicholas Georgescu-Roegen already in 1971. The law of physics are immune to our framing, mind-games and psychological weaknesses, such as the urge for never-ending growth.

The victims of the growth model

Who are the first victims of this never-ending growth model? In the EJAtlas (Atlas of Environmental Justice, www.ejatlas.org) we have gathered 2850 documented cases of environmental conflict as of July 2019. The cases in the EJAtlas are only a sample of a broader, unknown number of environmental conflicts happening in the world. About 12 per cent of those involve mortal victims and the number of murdered environmental defenders has quadrupled in a decade. While indigenous peoples are only 5% of the world population, they represent 15% of the world’s poorest people and even more striking: they are involved in 40% of all environmental conflicts globally. But the push for growth of Gross Domestic Product (GDP) is coming not only at their expense. Study after study shows that on average, the poor, people of colour and indigenous peoples live closer to extraction sites, highly polluted areas, flood-prone areas and other risky or degraded sites. GDP growth already leads to unequally distributed extra environmental harm which in turn deepens existing social inequalities. It should not come as a surprise that at the HLPF, experts agreed that we are far off track to address inequalities, which is SDG 10. They are also rising, instead of declining. No less than 56 people contributed to a state of the art report exposing the failure to deal with this crisis in ‘Falling through the cracks. Exposing inequalities in the EU and beyond.’

At the UN’s 2019 High Level Political Forum in New York, the annual review of the progress on achieving the SDGs, the one refrain issued by almost all delegates from all governments who spoke in the review of SDG 8 was: “we need more economic growth”.  Delegates from Israel and Switzerland were priding themselves on their growth rates and even the delegates from countries like Sweden and Costa Rica only talked about sustainable or decoupled growth, not postgrowth or degrowth.

Greenhouse gas emissions will continue to rise together with economic growth, no matter what the adjective is that politicians put before it, depending on what’s in vogue. Even remaining at the present level would imply a continued carnage at the “commodity extraction frontier” until so little is left that eternal warfare and collapse are inevitable. Anyone who has studied our planet and is intellectually honest knows that there is only one way to prevent a total collapse of both our life support systems and our civilisation: a socially just, well organised degrowth of the global economy.

News: A zero growth economy? What would it mean for us all?
Share The World's Resources operated a stall at a Quakers conference held at Friends House, London, on the 26th September 2009. The event focussed on the...
Article: How to kick the growth addiction
The hegemony of the growth-based model often prevents people from questioning its core assumptions. But the building blocks of a new economy are within...
Article: Managing without growth. Slower by design, not disaster
It took homo sapiens some 200,000 years to reach the first billion by about 1800. In just the 10 years separating the first and second edition of Managing...
Article: The decoupling delusion: rethinking growth and sustainability
Most economic policy around the world is driven by the goal of maximising economic growth, but if you think we have limitless solar energy to fuel...
Article: Sharing as the new common sense in a post-growth world
We need to talk a lot more about sharing as a way to radically reframe the post-growth debate, argues a recent report from the Green House. If growthism...
Printer-friendly version