The IMF and the World Bank: 75 years on 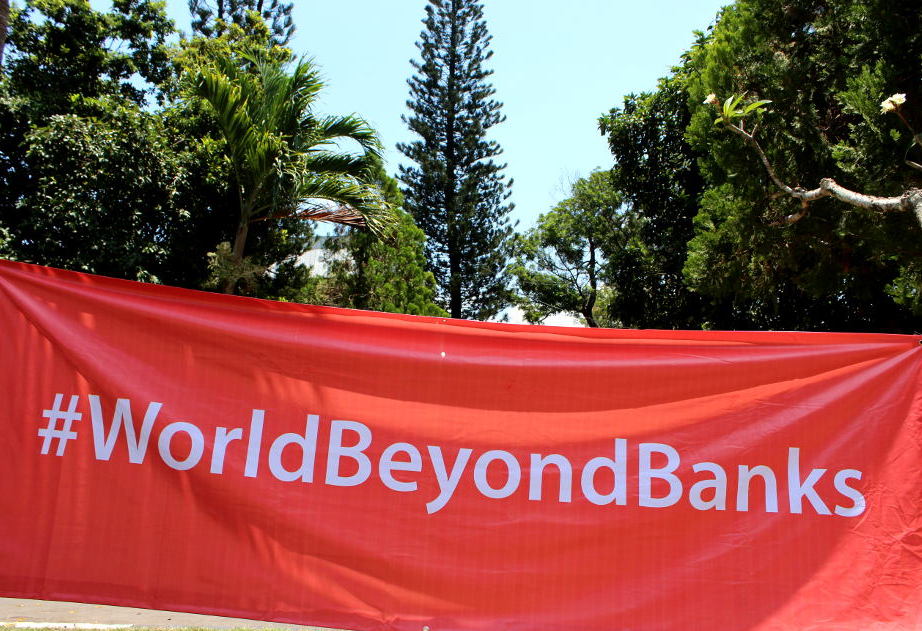 A decade after the financial crisis shook the foundations of the global financial system, the Bretton Woods Institutions face an uncertain future. The following overview is written for a series on the 'crisis of multilateralism' by openDemocracy with The Bretton Woods Project.

This year marks the 75th anniversary of the establishment of the IMF and World Bank, which followed the 1944 Bretton Woods conference. Although their roles have evolved over the past three-quarters of a century, these institutions have become important vehicles through which neoliberalism has been expanded and entrenched. Yet, despite their continued influence over macroeconomic policy and dominance over the global financial and development architecture, celebrations of the Bretton Woods Institutions’ landmark anniversary could well be muted.

A decade on from a crash so tumultuous that at the time it appeared to shake the very foundations of the global financial system, the remedy prescribed by the international financial institutions of deregulation, austerity and privatisation has failed to cure the disease. Today a sluggish global economy balances precariously on a cocktail of soaring debt and liquidity injections, while the casino-style shadow banking train speeds ahead.

These developments contributed to and take place amid a backdrop of a broader crisis of multilateralism that threatens the very existence of institutions like the IMF and World Bank. In recent years the battle lines between competing global powers have deepened to expose an unsettled landscape engulfed by trade tensions and protectionism. From Brexit to Trump and Duterte, recent opposition to conventional economics and status quo multilateralism has primarily taken the form radical right movements, while China’s increased role as a global creditor continues to provoke hostility from other major economies.

Moreover, by espousing a growth-first orthodoxy that relegates human rights, and governance structures that exacerbate global power imbalances, the Bretton Woods Institutions are yet to rise to the challenge of backing the radical reforms needed to fix the fractures built by their model of ‘development’ and to pave the way for a more just multilateralism – one that is anchored on an explicit commitment to human rights and sustainable development. All of these tensions build on 75 years of criticism, protest and resistance.

Protecting the core by excluding the periphery

Central to the criticisms of the Bretton Woods Institutions is their imbalanced governance structures that marginalise low-income countries, allowing wealthy states – who are the majority shareholders – to disproportionately exert decision-making power. It remains to be seen if the IMF’s long-awaited 15th quota review, which allocates voting power within Fund, will address these imbalances. Fuelling the discontent is the historic ‘gentleman’s agreement’ which ensures that the IMF is led by a European while the World Bank is headed by a US national. This was sadly reaffirmed by the 2019 one-man ‘race’ for the next World Bank president where the only candidate – David Malpass – was nominated by the United States and eventually selected by the Board.

Moreover, economic policy conditions that are required as part of loan programmes continue to weaken the sovereignty of borrower nations to make policy decisions. This is particularly the case with the IMF, which acts as the world’s lender of last resort for governments suffering serious balance of payments problems, who are often left with no other option. Indeed, last year, the number of conditions in each IMF loan programme was found to be rising. On top of these conditions, the IMF and World Bank exercise a powerful normative role through research, technical assistance and publications, influencing national policy dialogue to align with a market-solutions bias. Only last year, the World Bank published a controversial World Development Report that called for widespread labour market deregulation, and came under fire for the bias towards business deregulation and low corporation taxes in its Doing Business Report.

Only last year, the IMF was accused of not integrating recommendations from its evaluation office, echoing previous accusations of ‘groupthink’, which were cited as partially responsible for the IMF not foreseeing the 2008 global financial crisis – seen by many as a failure of its institutional mandate.

A 2017 internal evaluation outlined concerns about the development impact of the World Bank’s programmes and activities, and raised serious questions about whether its organisational environment encourages it to use insights from evaluations and other sources to inform the operations as a matter of course. These echo the findings of the 2006 Deaton Report, which found that the World Bank’s approach to knowledge production was self-referential and bordering on parody. Moreover, the World Bank has faced scrutiny over its increased investments in financial intermediaries, such as commercial banks – the opaque nature of which further corrodes transparency and accountability.

This year also witnessed the historic US Supreme Court decision in favour of Indian fisherfolk who challenged the claim of the International Finance Corporation (the private sector lending arm of the World Bank) to ‘absolute immunity’ from prosecution in US courts. However, questions remain about the extent to which this will change civil society’s ability to access justice.

A central criticism of both institutions has been their insistence that they are not bound to international human rights law, and their lack of an explicit human rights policy. As has been witnessed in recent IMF programmes in countries such as Argentina, Tunisia, and Jordan, the macroeconomic policy conditions applied often include austerity, a reduction of public-sector wage bills, regressive taxation, widespread deregulation, subsidy cuts and privatisation. This approach has led to accusations that IMF programmes protect the interests of creditors while failing to address the root causes of debt, as well as hampering the ability of governments to fulfill internationally agreed human rights obligations. While the IMF has changed its approachon areas such as inequality and gender in the last five years, research demonstrates that this is not effectively piercing through policy orthodoxy.

The World Bank’s 'Maximizing Finance for Development' agenda has focused on prioritising the use of private sector finance whenever possible, stipulating that it is needed to meet the trillions of dollars of infrastructure finance allegedly required to achieve the Sustainable Development Goals(SDGs). A model of ‘privatising profits and socialising losses’ also rests at the heart of the World Bank’s aggressive promotion of public-private partnerships (PPPs), which research has shown are often more expensive and less equitable than other public financing options. The regulatory and tax base ‘race to the bottom’ inherent in the competition for private sector finance also risks squeezing the fiscal space for vital services needed to uphold human rights. Indeed, a UN report published last year criticised the World Bank and IMF’s aggressive promotion of privatisation, arguing that widespread privatisation of public goods in many societies is “systematically eliminating human rights protections and further marginalising those living in poverty.”

Environmental destruction in the name of economic growth

The growth-first development model upheld by the IMF and World Bank has undoubtedly contributed to the current climate crisis, and attempts by the institutions to tackle this crisis have predominantly produced market-based solutions.

Despite the World Bank’s recent climate commitments, its investments in fossil fuels have been criticised for undermining climate goals. The Bank has continued to fund a substantial number of fossil fuel projectsm even since the signing of the Paris Climate Agreement in 2015. Additionally the International Finance Corporation now invests over 50 per cent of its portfolio in opaque financial intermediaries, which research has linked, for example, to the construction of 19 new coal-fired power plants in the Philippines.

Finally, the World Bank’s forest policy and weak safeguards on forest protection have also been found to infringe the rights of local communities and fail to protect one of the planet’s most important ‘carbon sinks’. This has led civil society organisations to call for the Bank to open up its Forest Notes – which are meant to guide the interface between its lending and forests – to consultation.

From their unequal governance structures to their growth-first orthodoxy, it is clear that the governance and activities of the World Bank and IMF remain deeply inadequate. Ten years on from the financial crash, with a rising tide of discontentment sweeping the world, the future of the Bretton Woods Institutions is more uncertain than ever.

Blog: Public-private partnerships don't work. It's time for the World Bank to take action.
This week, executive directors of the World Bank were handed a letter signed by more than 80 civil society organizations and trade unions from around the...
News: 53 economists write to IMF Directors on approach to social protection
The International Monetary Fund (IMF) was formed in 1945 to ensure the stability of the international monetary system. The letter below to IMF Directors...
Report: IMF should abandon "failed policies", says human rights reporteur
The International Monetary Fund (IMF) should change its priorities and finally let go of the outdated conditionalities of privatization, deregulation of...
Blog: Development: World Bank fudges on inequality
The World Bank has released its first annual report tracking progress towards the two key SDGs on poverty and inequality. But the analysis does not...
Printer-friendly version