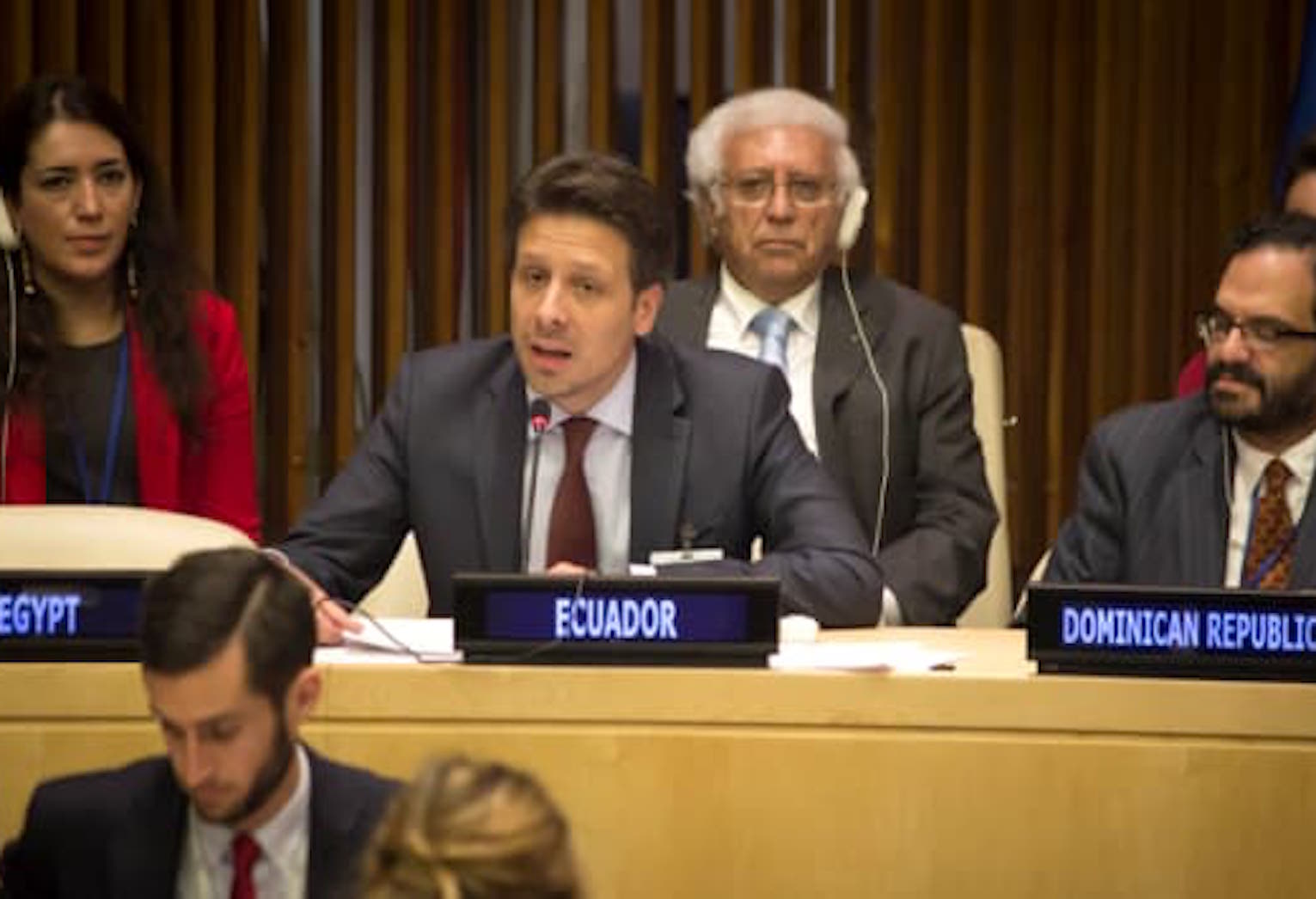 The Republic of Ecuador, currently chair of the largest single coalition of developing countries at the United Nations, is reviving a longstanding campaign for the creation of an inter-governmental UN tax body and the elimination of tax havens and illicit financial flows.

Practicing what it preaches, Ecuador says it is the world’s first country to hold a nation-wide referendum on tax havens, scheduled to take place on February 19. Addressing a meeting of the 134-member Group of 77 (G77) on January 13, Ecuadorean President Rafael Correa, who was anointed the new G77 chair for 2017, said “illegitimate wealth mostly affected the world’s poorer nations”. “There should be more knowledge havens and less tax havens,” he said, at a formal handover ceremony of the chairmanship, from Thailand to Ecuador.

Meanwhile, speaking at a civil society panel discussion in Washington DC on January 12, Guillaume Long, Ecuador’s Minister of Foreign Affairs, said Ecuador, in an unprecedented move, will let the people decide, pointing out that “the struggle against tax havens is a global struggle. “We need a UN tax body to ensure tax justice. Ecuador will unite with all those fighting this battle – states and civil society.”

The referendum, known as the “ethical pact,” will ask “Do you agree that, for those holding a popularly elected office or for public servants, there should be a prohibition on holding assets or capital, of any nature, in tax havens?” Public servants and elected officials will be given a year to repatriate their capital or be removed from office or their post. At the panel discussion, several US-based non-governmental organizations (NGOs) commended the new G77 chair, for leading a campaign both for the elimination of tax havens and the creation of a new UN tax body.

The proposal for a UN tax body has already been shot down twice by Western nations, first, at the Financing for Development (FfD) conference in Addis Ababa in July 2015, and also at the 14th session of the UN Conference on Trade and Development (UNCTAD 14) in Nairobi in August last year. Asked about the feasibility of the proposal against Western opposition, Eric LeCompte, Executive Director of the Jubilee USA Network, one of NGOs backing the proposal, told IPS: “In just a few years we’ve seen almost universal acknowledgment of the problems of tax avoidance, tax evasion and corruption. At the same time we do see clear opposition from many wealthy countries on the idea of a global tax body as part of a solution”.

For this to be successful, he pointed out, there needs to be some re-envisioning of the proposal from the Addis Ababa conference. He said the G77 could also engage in bilateral agreements to move this forward. “While the United Nations tries to operate by consensus, we could also see countries force a vote at the United Nations. While a vote would likely be successful under this method, without some re-envisioning of the concept, we’d likely see many wealthy countries refuse to participate in the process,” he warned. Asked if Ecuador will be able to pull it off?, LeCompte told IPS: “Ecuador seems to be operating out of a G77 consensus on these issues. Since the Financing for Development meetings in Addis Ababa, we’ve seen G77 countries like Ecuador strengthen their support for these efforts.”

The original proposal by the G77 called for the establishment of a standing intergovernmental group of experts to address tax issues, including international tax issues, and to assist countries better mobilize and employ fiscal revenues. This includes international initiatives to counter tax avoidance and tax evasion, as well as strengthening the capabilities of developing countries to address tax avoidance and tax evasion practices. In Africa alone, the estimated resources leaving the continent, in the form of illicit financial transfers, was nearly 530 billion dollars between 2002 and 2012, according to UNCTAD.

The three key causes of illicit financial outflows are largely commercial tax evasion, government corruption and criminal activity, including money laundering. Addressing the NGOs, the Ecuadorean Foreign Minister said: “Our government has introduced very redistributive policies in the most unequal continent on earth. Our priority is to fight inequality which is the cause of most of problems we face.” He pointed out that Ecuador has seen big improvements in living standards over the last decade due to major economic reforms, including a tripling of tax takes achieved overwhelmingly by collecting taxes, not by raising them. “This has become an important source of investment in public services. The next stage in this battle for a fair economy is against tax havens. Tax havens are a real ethical problem. For example, while Ecuadorian migrants loyally work long hours to send remittances to Ecuador, an elite section of the population siphons billions of dollars back out of the country to tax havens."

According to a press release, several experts, including Eric LeCompte, Jubilee USA; Mark Weisbrot, Center for Economic and Policy Research; Elise Bean, Former Staff Director and Chief Counsel of the U.S. Senate Permanent subCommittee on investigations; Aldo Caliari, Center of Concern; and Clark Gascoigne, FACT Coalition gave their support to the Ecuadorean initiatives on tax havens. The event moderator Eric LeCompte, Director of Jubilee USA, told the panel discussion: “This conversation today comes at a critical moment. Due to tax evasion and corruption the developing world loses more than a trillion dollars a year because of tax evasion and corruption. These tax issues are a global problem and require a global solution. Addressing tax havens is like a carnival game of whack-a-mole. You deal with problem in one place and it pops up in another.”

Economist Mark Weisbrot, Co-Director of the Centre for Economic and Policy Research (CEPR) said: “Latin America did go through a decade where poverty was reduced from 44 to 28 % in the region as a whole. The standard narrative is that this was just a commodities boom. Ecuador is probably the best example of why that is really not true. They had to do a whole set of institutional, policy and financial reforms in order to achieve the success that they did, and they did achieve success. They have reduced poverty by 30% by 2014. They reduced inequality. They increased access to healthcare. They tripled the amount of GDP that went to public investment.” He also said that Ecuador was able to build the institutions and do enormous financial and regulatory reforms that we could use here in the United States. They took control of the financial system and regulated it really for the first time in the way it should be regulated. I think the referendum on tax havens is very creative and innovative.”

Aldo Caliari, Director of the REthinking Bretton Woods Project, Center of Concern said: “The battle for an intergovernmental body was not won in Addis Ababa. We need to keep struggling. A UN intergovernmental body is about who defines the rules of the game. I salute the efforts” of Ecuador to raise awareness and pressure against tax havens. “I like the significance of the fact that Ecuador, with this mindset of achieving progress, is taking over the G77 presidency, because it is critical.”

Elise Bean, former Staff Director and Chief Counsel of the U.S. Senate Permanent Sub-Committee on investigations welcomed Ecuador’s work against tax havens saying: “One of the really interesting things is about how Ecuador is giving us an example about how if you strengthen the capacity to collect taxes it really contributes to stability, to the ability to fight poverty. This culture of paying taxes is a remarkable achievement and is something that should be studied and I think we should try to replicate it elsewhere. I have tremendous admiration for Ecuador, to show that it is possible to build a culture of paying taxes. I congratulate you on your country’s progress.”

Clark Gascoigne, Deputy Director of the FACT Coalition said: “Illicit financial flows have a devastating impact on developing countries, wringing tens of billions of dollars out of the developing world. But also have a major effect on developed countries. $150 billion dollars is the most recent estimate of the cost to the US from tax haven abuse annually. This of course exacerbates inequality, leads to austerity and undermines our ability to act collectively and solve problems.”

Porter McConnell, Director of the Financial Transparency Initiative said after the meeting: “I have been very impressed by the leadership that Ecuador has demonstrated on this issue of tax havens and on the issue of illicit financial flows more widely. We have been working with the government of Ecuador for some months to draw attention to the issue and to support the leadership role of Ecuador in the G77. We are very excited to see what comes next and are very supportive of the efforts of Ecuador,” McConnell said.

On Sunday 19 February, Ecuador held a referendum to bar politicians and civil servants from having assets in tax havens. It was the first ever referendum of this kind in the world. See the New Internationalist's collection of YouTube resources for more information.

Article: No tax, no justice
Finding ways to increase tax revenue is critical if developing countries are to fund essential public services and reduce poverty. Global reforms to...
Article: Tax havens are a global shame. Now is the time to put an end to them.
A rapidly growing global web of tax havens is one of the key drivers of global inequality, allowing some of the world’s super rich to pay no taxes or far...
Report: World's worst corporate tax havens exposed
Collecting tax is one of the key means by which governments are able to address poverty. But big business is dodging tax on an industrial scale, depriving...
Printer-friendly version